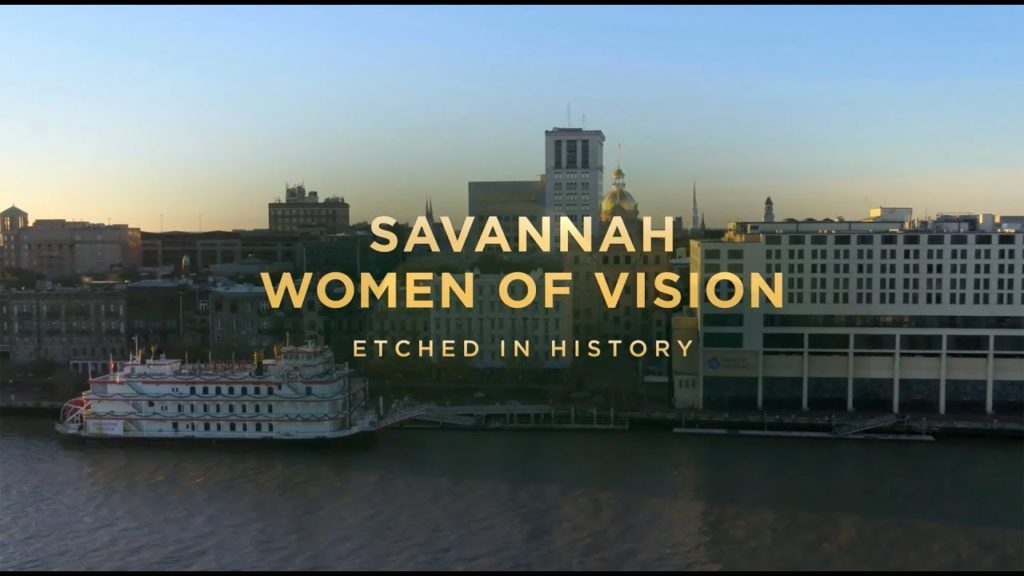 On Friday, February 14, 2020, at SCAD Savannah’s Arnold Hall, the university’s president and founder Paula Wallace led a celebration of the Savannah Women of Vision, an elite cadre of trailblazers whose remarkable ideas, insightful leadership, and distinguished service have profoundly sculpted the city of Savannah.

Wallace created and launched the Savannah Women of Vision investiture in 2016 in tandem with Georgia Day celebrations. Every two years, another class of honorees is celebrated. This year’s Savannah Women of Vision investiture honored two new members of indefatigable spirit, character, and service: Clermont Lee and Suzanne Shank. The event took place in front of a packed house at the Arnold Hall Auditorium (1810 Bull Street), filled with family, friends, civic leaders, business owners, community members, and many SCAD students and professors.

All inductees in the Savannah Women of Vision inductee are honored with a large, gilded relief portrait created by SCAD alumnus Michael Porten (M.F.A., painting, 2012; B.F.A., illustration, 2004), which is permanently installed on the walls of Arnold Hall. Viewed together, the portraits tell stories that resonate in all Savannah neighborhoods, in all four corners of Georgia, and far beyond.

Suzanne Shank (b. 1952), an accomplished, barrier-breaking veteran of investment banking, is the founding owner, chairwoman, and CEO of Siebert Williams Shank & Co. She is a native of Savannah and has been named one of the 50 Most Powerful Black Women in Business by Black Enterprise magazine and was recognized on Essence magazine’s Power List. Of her many advocacies, Shank champions mentoring programs for urban youth and serves on boards for the Detroit Institute of the Arts, Women in Public Finance, Citizens Budget Commission, and Detroit Regional Chamber.

“From the classrooms of Savannah’s own Johnson High School to Wall Street and boardrooms around the world, wherever Suzanne’s journey takes her, you can bet barriers will be dismissed, deals will be brokered,” said Paula Wallace SCAD.

Suzanne founded a top investment firm, became one of the world’s most powerful financiers, and made history by being the first African American woman to put together a deal worth more than a billion dollars. In the long course of her career, she has moved literally trillions of dollars in investments. “We expect her to reach quadrillions soon,” Wallace said. “Big numbers, and Suzanne’s heart is even bigger.”

Wallace tells a story about Shank, how, a few years ago, when she was already America’s top dealmaker for airport funding, an opportunity appeared on her radar to help refinance Savannah/Hilton Head International Airport. “Suzanne could have sent her team to work out the details but instead came down in person to meet with airport leadership and city council — to make our hometown airport the best it could be.”

“Suzanne is a true beacon of intellectual and moral courage,” Wallace said. “In an industry traditionally owned by men, she’s always the smartest person in the room. Suzanne is the kind of person who keeps moving forward, ever onward!”

Pioneering landscape designer Clermont Lee (1914-2006) was one of the first women to lead a landscape architecture practice in Georgia. Her work was meticulously researched, with a particular focus on formal English and American gardens of the antebellum period. Lee was also responsible for working to found the Georgia State Board of Landscape Architects, a licensing board for landscape architects across the state. Her work can be experienced in the gardens at the Isaiah Davenport House, Juliette Gordon Low Birthplace, and Owens-Thomas House, all in Savannah.

“Clermont could transform any greenspace into delightful perfection,” Paula Wallace said. “For Clermont, everything — from the planting of trees and shrubbery to the placement of a garden bench — was intentional. And somehow just right.”

Wallace joked that when she introduced legendary couturier Pierre Cardin to Savannah several years ago, he said, as he walked around, “Why, this whole city is a garden!”

“Our natural and cultivated live oak trees, azaleas, and other plants and flora are what make our air healthy,” Wallace said. “Each day, each live oak provides oxygen for four people. Clermont Lee did more than just beautify — she engineered our green environment.”

Lee is also recognized for her brilliance in saving Savannah’s 22 squares from being destroyed when the automobile took over the city in the early 20th century, helping the city see how, with minimal design adjustments, the historic squares could remain intact while still affording steady traffic flow.

“Clermont’s coup de maître was making all this beauty sustainable. In 1958 she helped found the Georgia State Board of Landscape Architects so that countless others could follow her career path as licensed professionals,” Wallace said, emphasizing the professional mission of SCAD and the university’s debt of gratitude to Lee for championing the professionalization of the design disciplines in Georgia.