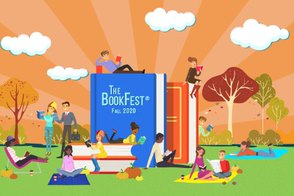 Authors, industry people, and fans alike have had a rough year in terms of book festivals. Reedpop just announced that BookExpo/BookCon is a no go in New York. Virtual festivals have become the norm this year, and are looking like a great option, even after in-person events return.

The BookFest® from Black Château Enterprise and Books That Make You, is one of the frontrunners in online book festivals. This award-winning festival had its Fall event online last month and was a huge success.

The BookFest® for Fall 2020 expanded from one day to two, with extra programming geared more toward the writer on Sunday. They had a live author chat over Zoom, which allowed participants more of a chance to interact than one would get with a live festival.

The BookFest® won awards for their Spring event this year. They were a presence at the Muse Creative Awards, with Black Château taking a Gold and Silver award, and participating author Sara Winokur (“Double Blind: The Icelandic Manuscript Murders”) winning for cover art along with Art Directors Dacey Villarreal and Dave Duffy.

Founder of Black Château and The BookFest®, Desireé Duffy, said, “I am proud of the success of The BookFest® and the recognition from the w3 Awards. This is an honor and affirmation of the entire team’s hard work. Thank you to the w3 Awards’ judges for this prestigious recognition.”

The BookFest® reached thousands of people in a number of ways, giving people around the world a chance to join in on the literary fun. Their successful event garnered 947,600 article impressions and 4015+ clicks. Between all avenues, their social media reached 273,947 people. The event’s website sessions reached 7,200 people, with 6,500 views on YouTube. The live stream and content on the website (which included a scavenger hunt) were accessed by almost 5,000 people, with more watching natively on YouTube and social media. Reach like that is making The BookFest® a leader in the future of book festivals.

The current pandemic may have required us all to move from in-person events to online events, but there are so many advantages to doing so. Unlike so many larger events, The BookFest® was easily able to move online. That means, of course, that people from all over could attend the event in a way they’ve never been able to before.

The BookFest® is planning their next event for Spring of 2021, with another one coming in the Fall. If you’d like to check out their upcoming Spring event, sign up at www.thebookfest.com to learn more!